How Plasmacluster ions are generated

Ions form clusters for greater stability
The positive hydrogen ions (H⁺) and negative oxygen ions (O₂⁻) each have an electrical charge. This attracts water molecules in the air (H₂O), which surround the ions and form stable cluster ions.

The positive (H⁺) and negative (O₂⁻) ions of the Plasmacluster ions bond on the surface of airborne viruses and other substances and change into OH radicals. With their extremely strong oxidizing power, the OH radicals quickly extract hydrogen (H) from the protein on the surface of viruses and other substances, thus decomposing the protein and suppressing activity. The surface of things like bacteria and allergens consists mainly of protein. Removing the hydrogen atom (H) from this structure inactivates the undesirable substance. Furthermore, the OH radical bonds with the removed hydrogen atom (H) to immediately form water (H₂O), which is returned to the air.

Clean Every Corner of the Room

Plasmacluster® ions disperse throughout the room, actively attacking germs, bacteria, viruses, mold, and fungus, reaching more pollutants than conventional filter-based systems! Traditional systems rely on air passing through the filter, but Plasmacluster® ions can spread to every corner of the room to actively clean. Plasmacluster® ions reduce odors at the molecular level, even from embedded odors in carpeting, drapery, and furniture.

How Does Plasmacluster Work?

Sharp’s patented Plasmacluster® Ion air purification technology mimics nature’s own cleaning process, by splitting water molecules into positively and negatively charged ions, which spread throughout the room and actively break down pollutants like germs, airborne and surface-adhering bacteria, fungus, mold, viruses and clinging odors, and then return to the air as water vapor.

All air filters are not created equal. See the benefits of a Sharp air purifier first hand as we test a Sharp Air Purifier filter alongside a filter from a popular air purifier model and see the difference! 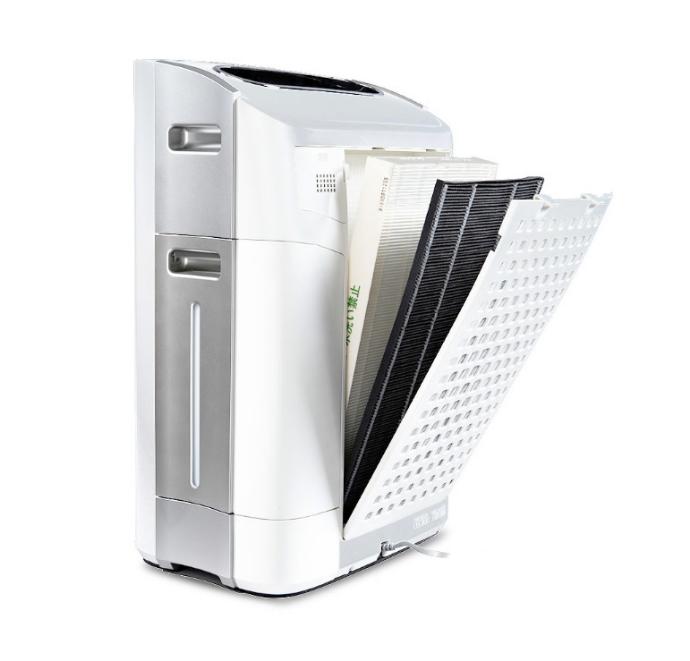 All air filters are not created equal. See the benefits of a Sharp air purifier first hand as we test a Sharp Air Purifier filter alongside a filter from a popular air purifier model and see the difference!

Long-life True HEPA filters typically require changing only once every 2 - 5 years so operating costs are low.* *Actual filter life will vary depending on the environment.

WHY DOES 0.3 MICRONS MATTER?

Pet allergens and tobacco smoke particles are typically smaller than 1 micron (mic). With True HEPA filtration, which removes 99.97% of airborne pollutants as small as 0.3 microns, including dust, pollen, pet dander and smoke particles, more particles can be captured when compared to a HEPA-type filter.